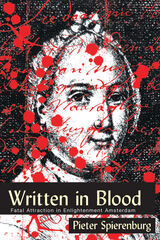 Pieter Spierenburg narrates two sensational murder cases among intimates in eighteenth-century Amsterdam. The cases recounted here both resulted from fatal attraction. They represented the darker side of the eighteenth-century revolution in love. This period witnessed great cultural changes affecting personal relationships and emotions. The new ideal of love demanded that couples spend much of their time together and explore each other’s feelings. But this new ideal was meant for married and engaged couples only; for others it meant disaster. Love gone wrong was the theme of the sentimental novels of the age, but it also happened to real people, with fatal consequences.

Written in Blood traces the lives and ultimate fate of Nathaniel Donker, who, together with the help of his mistress, brutally murders and dismembers the wife. The second tale focuses on J. B. F. van Gogh, who falls in love with a prostitute; she later rejects him and, when a letter written with his own blood fails to change her mind, he stabs her to death in a fit of passionate rage.

In Written in Blood, the reader gets two stories for the price of one. And, whereas earlier microhistories have been situated in a village or a small town, the scene here is Amsterdam and its canals. Spierenburg reveals in detail what concepts like honor and gender roles came down to in individual lives. He also shows that these murders produced a strange mixture of modern romantic feelings and traditional notions of honor and shame.

AUTHOR BIOGRAPHY
Pieter Spierenburg is professor of history at Erasmus University, the Netherlands.
REVIEWS
“In Written in Blood, Pieter Spierenburg demonstrates an almost unrivaled knowledge of eighteenth-century Amsterdam and an equally sure and deep understanding of crime and punishment within that polity. This is, moreover, a stunning work of historical detection. Spierenburg has followed up every possible lead, unraveled torturous complexities, laid bare hidden linkages, and—in doing so—offers a true gold mine of information about Amsterdam in the eighteenth century.” —Mary Lindemann, Carnegie Mellon University