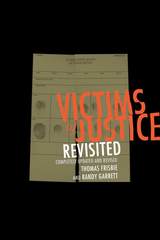 Perhaps no legal case has done more to reshape America's debate over the death penalty than Illinois's prosecution and conviction of Rolando Cruz. This updated and significantly expanded edition of Victims of Justice tells the pivotal story of Cruz and his two co-defendants after the 1983 murder of ten-year-old Jeanine Nicarico of Naperville, Illinois. The book follows the story from the day the crime occurred to the groundbreaking trial of seven law officers accused of conspiring to deny Cruz a fair trial.

The kidnapping of Jeanine Nicarico from her quiet suburban home and her brutal slaying sparked a public demand for justice. But the longer authorities strove to execute Cruz and the two other men, the more evidence emerged that the defendants were innocent-and that the death penalty process in America itself was deeply flawed.

Here is the start of a chain reaction that led to a moratorium on the death penalty in Illinois and the clearing out of Death Row, as Illinois Governor George Ryan-worried about unfairness in death penalty convictions-granted clemency to all those awaiting execution. This is a detailed study of a nationally known case that should be cited whenever serious scholars examine how capital cases are prosecuted in America. Here is the most thorough investigation yet published into the background of the man who-after Cruz already was on Death Row-claimed to be the real killer.
AUTHOR BIOGRAPHY
Thomas Frisbie has been an award-winning writer and editor for the Chicago Sun-Times since 1976. As a reporter covering the courts, he followed the Rolando Cruz case for many years. He has a degree in political science from the University of Illinois at Urbana-Champaign and is the vice president of the Society of Midland Authors. He lives in a Chicago suburb.

Randy Garrett, a native Chicagoan, now works as a Mental Health Technician in a behavioral health center in Orlando, Florida. As a freelance reporter for the Chicago Lawyer and the Naperville City Star, Garrett was one of the first writers to expose flaws in the investigation of the Jeanine Nicarico murder investigation and subsequent legal proceedings. His own investigation of the case began in 1985 and has continued ever since.

"This is the first comprehensive account of the most extraordinary criminal case I know - the infamous Nicarico murder -and the 12-year crusade for justice which it inspired. The two men who were on the scene the longest, and who probably know more about this case than anyone else, have written a gripping, provocative, often moving account of how great evil -and good-came to take place." --Scott Turow