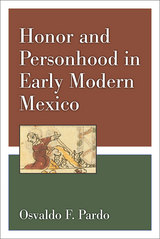 Osvaldo F. Pardo examines the early dissemination of European views on law and justice among Mexico’s native peoples. Newly arrived from Spain in the sixteenth and seventeenth centuries, mendicant friars brought not only their faith in the authority of the Catholic Church but also their reverence of the monarchy. Drawing on a rich range of documents dating from this era—including secular and ecclesiastical legislation, legal and religious treatises, bilingual catechisms, grammars on indigenous languages, historical accounts, and official reports and correspondence—Pardo finds that honor, as well as related notions such as reputation, came to play a central role in shaping the lives and social relations of colonists and indigenous Mexicans alike. Following the application and adaptation of European ideas of justice and royal and religious power as they took hold in the New World, Pardo sheds light on the formation of colonial legalities and long-lasting views, both secular and sacred, that still inform attitudes toward authority in contemporary Mexican society.
AUTHOR BIOGRAPHY
Osvaldo Pardo is Associate Professor of Spanish at the Department of Literatures, Cultures and Languages of the University of Connecticut. He is the author of The Origins of Mexican Catholicism: Nahua Rituals and Christian Sacraments in Sixteenth-Century Mexico (University of Michigan Press, 2006).