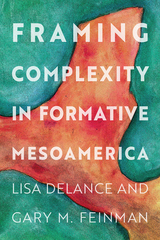 Contributors present multiple lines of evidence demonstrating the process of social complexity and reconsider a number of traditionally accepted models and presumed tenets as a result of the wealth of empirical data that has been gathered over the past four decades. Their chapters approach complexity as a process rather than a state of being by exploring social aggregation, the emergence of ethnic affiliations, and aspects of regional and macroregional variability.

Framing Complexity in Formative Mesoamerica presents some of the most recent data—and the implications of that data—for understanding the development of complex societies as human beings moved into urban environments. The book is an especially important volume for researchers and students working in Mesoamerica, as well as archaeologists taking a comparative approach to questions of complexity.

Gary M. Feinman is the MacArthur Curator of Anthropology at The Field Museum, Chicago. He is the founding and contact coeditor for the Journal of Archaeological Research and has published more than 15 books and 200 scholarly articles, reviews, and chapters. His research interests include comparative studies of leadership, cooperation, and inequality; preindustrial economics; urbanism; and the complex relations between humans and environments over time.
REVIEWS
“An innovative and up-to-date synthesis of artifactual, iconographic, and settlement pattern data that examines how diverse groups negotiated new social environments and economic interactions during Mesoamerica’s Formative period.”
—Jessica L. Munson, Lycoming College