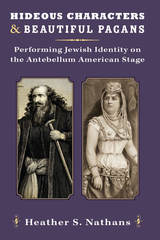 While battling negative stereotypes, American Jews carved out new roles for themselves within the first theatrical entertainments in America. Jewish citizens were active as performers, playwrights, critics, managers, and theatrical shareholders, and often tied their involvement in these endeavors to the patriotic rhetoric of the young republic as they struggled to establish themselves in the new nation. Examining play texts, theatrical reviews, political discourse, and public performances of Jewish rights and rituals, Hideous Characters and Beautiful Pagans argues that Jewish stage types shed light on our understanding of the status of Jewish Americans during a critical historical period.
Using an eclectic range of sources including theatrical reviews, diaries, letters, cartoons, portraiture, tax records, rumors flying around the tavern, and more, Heather S. Nathans has listened for the echoes of vanished audiences who witnessed and responded to these stereotypes onstage, from the earliest appearance of Shylock on an American stage in 1752 to Jewish theater artists on the eve of the Civil War. The book integrates social, political, and cultural histories, with an examination of those texts (both dramatic and literary) that shaped the stage Jew.

AUTHOR BIOGRAPHY
Heather S. Nathans is Professor in the Department of Drama and Dance at Tufts University.

TABLE OF CONTENTS
Contents
Introduction: Something in the Jewish Character
Chapter 1 / Crisis and Change: Transforming Jewish Masculinity from the Revolution to the Jew Bill of 1826
Chapter 2 / Blood and Sacrifice: Jewish Citizenship, Masculinity, and Violence, 1826–1861
Chapter 3 / Strangers in a Strange Land: From the Wandering Jew to the Cosmopolitan Citizen
Chapter 4 / “For They Abide with Us”: Forging Communities on and off the Stage
Chapter 5 / Beautiful Pagans: Dramatic and Domestic Encounters
Chapter 6 / “If I Forget Thee”: Performing Jewish Rituals on the Antebellum Stage
Epilogue: Idealists and Dreamers
Notes
Bibliography
Index
REQUEST ACCESSIBLE FILE