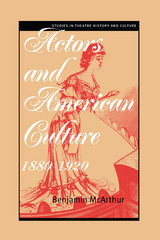 Actors and American Culture, 1880-1920
by Benjamin Mcarthur
University of Iowa Press, 2000
Paper: 978-0-87745-710-7
The forty years from 1880 to 1920 marked the golden age of the American theatre as a national institution, a time when actors moved from being players outside the boundaries of respectable society to being significant figures in the social landscape. As the only book that provides an overview of the late nineteenth- and early twentieth-century theatre,Actors and American Culture is also the only study of the legitimate stage that overtly attempts to connect actors and their work to the wider aspects of American life.
AUTHOR BIOGRAPHY
Benjamin McArthur received his B.A. from Andrews University and his Ph.D. from the University of Chicago. He is professor of history at Southern Adventist University.
TABLE OF CONTENTS