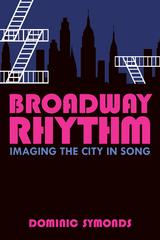 Broadway Rhythm is a guide to Manhattan like nothing you've ever read. Author Dominic Symonds calls it a performance cartography, and argues that the city of New York maps its iconicity in the music of the Broadway songbook. A series of walking tours takes the reader through the landscape of Manhattan, clambering over rooftops, riding the subway, and flying over skyscrapers. Symonds argues that Broadway's songs can themselves be used as maps to better understand the city though identifiable patterns in the visual graphics of the score, the auditory experience of the music, and the embodied articulation of performance, recognizing in all of these patterns, corollaries inscribed in the terrain, geography, and architecture of the city.

Through musicological analyses of works by Gershwin, Bernstein, Copland, Sondheim and others, the author proposes that performance cartography is a versatile methodology for urban theory, and establishes a methodological approach that uses the idea of the map in three ways: as an impetus, a metaphor, and a tool for exploring the city.

AUTHOR BIOGRAPHY
Dominic Symonds is Professor of Drama at the University of Lincoln, United Kingdom.