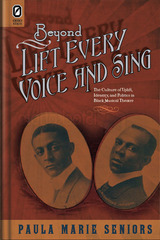 Paula Marie Seniors’s Beyond Lift Every Voice and Sing is an engaging and well-researched book that explores the realities of African American life and history as refracted through the musical theater productions of one of the most prolific black song-writing teams of the early twentieth century. James Weldon Johnson, J. Rosamond Johnson, and Bob Cole combined conservative and progressive ideas in a complex and historically specific strategy for overcoming racism and its effects. In Shoo Fly Regiment (1906–1908) and The Red Moon (1908–1910), theater, uplift, and politics collided as the team tried to communicate a politics of uplift, racial pride, gender equality, and interethnic coalitions. The overarching question of this study is how roles and representations in black musical theater both reflected and challenged the dominant social order. While some scholars dismiss the team as conformists, Seniors’s contention is that they used the very tools of hegemony to make progressive political statements and to create a distinctly black theater informed by black politics, history, and culture. These men were writers, musicians, actors, and vaudevillians who strove to change the perception of African Americans on stage from one of minstrelsy buffoonery to one of dignity and professionalism.