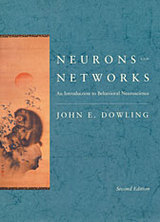 Harvard University Press is proud to announce the second edition of a widely admired introductory textbook. When first published, Neurons and Networks filled the need for an introductory neuroscience text that is lucid, accessible, authoritative, logically organized, and concise. Avoiding the encyclopedic coverage that makes most neuroscience texts overwhelming, Neurons and Networks focused instead on building the solid foundation of understanding and knowledge required for further study.

The new edition retains the features that made the first edition so attractive: consistent emphasis on results and concepts that have stood the test of time; abundant high-quality illustrations; exceptionally clear explanations of technical terms. Completely revised and enlarged with six new chapters, the second edition of Neurons and Networks is an introduction not just to neurobiology, but to all of behavioral neuroscience. It is an ideal text for first- or second-year college students with minimal college science exposure. It is also an invaluable resource for students in biology, psychology, anthropology, and computer science who seek an accessible guide to a discipline that will be a critically important area of research in the twenty-first century.

REVIEWS
[Neurons and Networks] covers the classic material of neurobiology. It has evolved from years of lectures given to undergraduates at Harvard University by the renowned retinal physiologist John Dowling… Overall, this is a sober and scholarly volume that strikes me, with its terse, no-frills style and reliance on the history of ideas, as very Harvard. Although intended as an introduction to basic neurobiology, it is a satisfying book at several levels.
-- Michael R. Hanley Nature


[Neurons and Networks] provides an up-to-date introduction to the whole field of neuroscience… It falls into two parts, each consisting of nine chapters: neurons (cellular neuroscience) and networks (integrative neuroscience). Dowling uses the foundations in the cell biology, biophysics and biochemistry of neurons laid in the first part to develop an account of the system properties of networks such as memory, visual processing and motor control.
-- C. U. M. Smith Times Higher Education Supplement