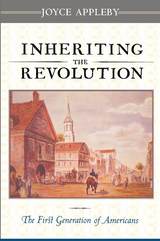 Born after the Revolution, the first generation of Americans inherited a truly new world—and, with it, the task of working out the terms of Independence. Anyone who started a business, marketed a new invention, ran for office, formed an association, or wrote for publication was helping to fashion the world’s first liberal society. These are the people we encounter in Inheriting the Revolution, a vibrant tapestry of the lives, callings, decisions, desires, and reflections of those Americans who turned the new abstractions of democracy, the nation, and free enterprise into contested realities.

Through data gathered on thousands of people, as well as hundreds of memoirs and autobiographies, Joyce Appleby tells myriad intersecting stories of how Americans born between 1776 and 1830 reinvented themselves and their society in politics, economics, reform, religion, and culture. They also had to grapple with the new distinction of free and slave labor, with all its divisive social entailments; the rout of Enlightenment rationality by the warm passions of religious awakening; the explosion of small business opportunities for young people eager to break out of their parents’ colonial cocoon. Few in the nation escaped the transforming intrusiveness of these changes. Working these experiences into a vivid picture of American cultural renovation, Appleby crafts an extraordinary—and deeply affecting—account of how the first generation established its own culture, its own nation, its own identity.

The passage of social responsibility from one generation to another is always a fascinating interplay of the inherited and the novel; this book shows how, in the early nineteenth century, the very idea of generations resonated with new meaning in the United States.
TABLE OF CONTENTS
Contents
1 Introduction
2 Responding to a Revolutionary Tradition
3 Enterprise
4 Careers
5 Distinctions
6 Intimate Relations
7 Reform
8 A New National Identity
Notes
Index