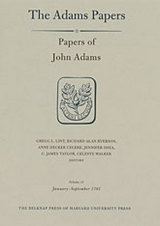 Papers of John Adams, Volume 11: January–September 1781
by John Adams, Robert Joseph Taylor and Mary-Jo Kline
edited by Gregg L. Lint, Richard Alan Ryerson, Anne Decker Cecere, Celeste Walker, Jennifer Shea and C. James Taylor
Harvard University Press, 1977
Cloth: 978-0-674-01136-6
In mid-March 1781 John Adams received his commission and instructions as minister to the Netherlands and embarked on the boldest initiative of his diplomatic career. Disappointed by the lack of interest shown by Dutch investors in his efforts to raise a loan for the United States, Adams changed his tactics, and in a memorial made a forthright appeal to the States General of the Netherlands for immediate recognition of the United States. Published in Dutch, English, and French, it offered all of Europe a radical vision of the ordinary citizen's role in determining political events. In this volume, for the first time, the circumstances and reasoning behind Adams's bold moves in the spring of 1781 are presented in full.

In July the French court summoned Adams, the only American in Europe empowered to negotiate an Anglo-American peace, to Paris for consultations regarding an offer made by Austria and Russia to mediate the Anglo-French war. In his correspondence with France's foreign minister, the Comte de Vergennes, Adams passionately insisted that the United States was fully and unambiguously independent and sovereign and must be recognized as such by Great Britain before any negotiations took place. This volume shows John Adams to be a determined and resourceful diplomat, unafraid to go beyond the bounds of traditional diplomacy to implement his vision of American foreign policy.

Introduction
1. Public Diplomacy at the Hague
2. John Adams and His Letterbooks
3. Notes on Editorial Method

Reviews of this book:
The heart of the matter, quite simply, is John Adams--fussing, fuming, stretching his mind to its widest effort, using his eyes to detect everything visible and supposable about the human comedy and tragedy of which he is an event making part.
--Adrienne Koch, New York Times Book Review

Reviews of this book:
The high quality of production that readers have come to expect from The Adams Papers has been maintained by the Belknap Press. The editors are to he congratulated for so capably continuing publication of this comprehensive and useful documentary edition.
--Richard Middleton, William and Mary Quarterly

Reviews of this book:
Mr. Butterfield brought to the immense project the high scholarly and literary standards that have distinguished it to this day, as publication of the Papers continues in one splendid volume after another.
--David McCullough, John Adams

Reviews of this book:
The modern craft of documentary editing--which these superb volumes illustrate at its best--is facing a crisis of funding and of confidence. Volumes such as these and the cumulative insight that they give us as scholars and as a people into the origins of our national institutions are a powerful argument for continuing to invest in the scholarship that produces them.
--Constance B. Schulz, Journal of Southern History

Reviews of this book:
In the Papers of John Adams the superb standard of editorial scholarship that has been the hallmark of the Adams papers remains evident. It is all there: scrupulous care in presenting the texts; thorough, judicious, and insightful annotation; and the detailed analytic system of indexing that makes it possible to consult the published Adams papers so efficiently...As a result, the new volumes interlock closely with the old so as to enhance the utility of each part of the entire group.
--Richard D. Brown, American Historical Review
TABLE OF CONTENTS