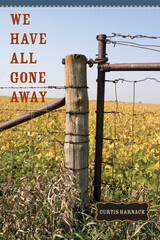 In We Have All Gone Away, his emotionally moving memoir, Curtis Harnack tells of growing up during the Great Depression on an Iowa farm among six siblings and an extended family of relatives. With a directness and a beauty that recall Thoreau, Harnack balances a child’s impressions with the knowledge of an adult looking back to produce what Publishers Weekly called “a country plum of a book, written with genuine affection and vivid recall.”
In a community related by blood and harvest, rural life could be bountiful even when hard economic times threatened. The adults urged children to become educated and to keep an eye on tomorrow. “We were all taught to lean enthusiastically into the future,” Harnack recalls, which would likely be elsewhere, in distant cities. At the same time, the children were cultivating a resiliency that would serve them well in the unknown world of the second half of the twentieth century.
Inevitably, the Midwest’s small, diversified family farm gave way to large-scale agriculture, which soon changed the former intimate way of life. “Our generation, using the mulched dead matter of agrarian life like projectile fuel for our thrust into the future, became part of that enormous vitality springing out of rural America,” notes Harnack. Both funny and elegiac, We Have All Gone Away is a masterful memoir of the joys and sorrows of Iowa farm life at mid-century, a world now gone “by way of learning, wars, and marriage” but still a lasting part of America’s heritage.

AUTHOR BIOGRAPHY
Curtis Harnack grew up on a farm in Plymouth County in northwest Iowa. Professor of literature at Sarah Lawrence College from 1960 to 1971, executive director of Yaddo from 1971 to 1987, and president of the School of American Ballet from 1992 to 1997, he currently lives in New York City and still owns part of the family farm. In addition to The Attic: A Memoir, Gentlemen on the Prairie, We Have All Gone Away, he is the author of, among others, Persian Lions, Persian Lambs; Limits of the Land; Love and Be Silent; and The Work of an Ancient Hand.

TABLE OF CONTENTS
Contents
1. The Return
2.The Barns
3. Queen of Hearts
4. Rooms of the House
5. The Milky Way
6. The Eighty
7. Barney
8. Bringing in the Sheaves
9. Father, Forgive Them
10. Next of Kin
11. These Mothers
12. Away
REQUEST ACCESSIBLE FILE