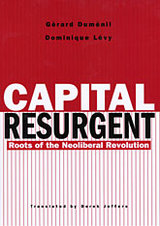 The advent of economic neoliberalism in the 1980s triggered a shift in the world economy. In the three decades following World War II, now considered a golden age of capitalism, economic growth was high and income inequality decreasing. But in the mid-1970s this social compact was broken as the world economy entered the stagflation crisis, following a decline in the profitability of capital. This crisis opened a new phase of stagnating growth and wages, and unemployment. Interest rates as well as dividend flows rose, and income inequality widened.

Economists GÃƒÂ©rard DumÃƒÂ©nil and Dominique LÃƒÂ©vy show that, despite free market platitudes, neoliberalism was a planned effort by financial interests against the postwar Keynesian compromise. The cluster of neoliberal policies--including privatization, liberalization of world trade, and reduction in state welfare benefits--is an expression of the power of finance in the world economy.

The sequence of events initiated by neoliberalism was not unprecedented. In the late nineteenth century, when economic conditions were similar to those of the 1970s, a structural crisis led to the first financial hegemony culminating in the speculative boom of the late 1920s. The authors argue persuasively for stabilizing the world economy before we run headlong into another economic disaster.

Part I. Crisis and Neoliberalism
1. The Strange Dynamics of Change
2. Economic Crises and Social Orders

Part II. Crisis and Unemployment
3. The Structural Crisis of the 1970s and 1980s
4. Technical Progress: Accelerating or Slowing?
5. America and Europe: The Creator of Jobs and the Creator of Unemployment
6. Controlling Labor Costs and Reining in the Welfare State
7. Unemployment: Historical Fate?
8. The End of the Crisis?


Part III. The Law of Finance
9. The Interest Rate Shock and the Weight of Dividends
10. Keynesian State Indebtedness and Household Indebtedness
11. An Epidemic of Financial Crises
12. Globalization under Hegemony
13. Financialization: Myth or Reality?
14. Does Finance Feed the Economy?
15. Who Benefits from the Crime?

Part V. History on the March
22. A Keynesian Interpretation
23. The Dynamics of Capital

Appendix A. Other Studies by the Authors
Appendix B. Sources and Calculations
Notes
Index

This remarkable book offers a closely argued and persuasive interpretation of the political economy of Europe and the U.S. from 1970 to the present, based on a much wider discussion ranging in time from the late 19th century, and touching on the history of the industrializing countries of Asia and Latin America. The interpretation of contemporary political economy offers fresh and challenging perspectives to the ongoing debate about world economic policy.
--Duncan K. Foley, The New School for Social Research