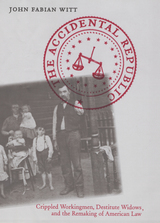 John Fabian Witt argues that experiments in accident law at the turn of the twentieth century arose out of competing views of the loose network of ideas and institutions that historians call the ideology of free labor. These experiments a century ago shaped twentieth- and twenty-first-century American accident law; they laid the foundations of the American administrative state; and they occasioned a still hotly contested legal transformation from the principles of free labor to the categories of insurance and risk. In this eclectic moment at the beginnings of the modern state, Witt describes American accident law as a contingent set of institutions that might plausibly have developed along a number of historical paths. In turn, he suggests, the making of American accident law is the story of the equally contingent remaking of our accidental republic.

1. Crippled Workingmen, Destitute Widows, and the Crisis of Free Labor
2. The Dilemmas of Classical Tort Law
3. The Cooperative Insurance Movement
4. From Markets to Managers
5. Widows, Actuaries, and the Logics of Social Insurance
6. The Passion of William Werner
7. The Accidental Republic

John Witt paints his portrait of industrializing America with the subtlety of a master and on an immense canvas. His magisterial history is much more than an account of the rise of workers compensation, still one of our greatest social reforms. Witt vividly recreates the social context of the late 19th century industrial world - workers' appalling injury and death rates, their mutual help and insurance associations, mass immigration, the rise of Taylorist management, the struggles to give new meaning to the free labor ideal, the encounter between European social engineering and American anti-statism and individualism, and the politics and economics of labor relations in the Progressive era. Out of these materials, Witt shows, the law helped fashion a new social order. His analysis has great contemporary significance, revealing both the alluring possibilities and the enduring limits of legal reform in America. It is destined to become a classic of social and legal history.
--Peter H. Schuck, author of Diversity in America: Keeping Government at a Safe Distance

John Witt shows us the power of perceptive legal history at work. Within the tangle of compensation for industrial accidents, he discovers not only a legal struggle whose outcome set the pattern for many 20th century interventions of government in economic life, but also a momentous confrontation between contract and collective responsibility. Anyone who finds American history absorbing will gain pleasure and insight from this book.
--Viviana Zelizer, Princeton University, author of The Social Meaning of Money: Pin Money, Paychecks, Poor Relief, and Other Currencies

In 1940 Willard Hurst and Lloyd Garrison inaugurated modern socio-legal studies in the United States with their history of workers' injuries and legal process in Wisconsin. Two generations later, John Fabian Witt's The Accidental Republic marks the full maturation of that field of inquiry. Deftly integrating a legal analysis of tort doctrine, a history of industrial accidents, and a fresh political-economic understanding of statecraft, Witt demonstrates the significance of turn-of-the-century struggles over work, injury, risk, reparation, and regulation in the making of our modern world. Sophisticated, comprehensive, and interdisciplinary, The Accidental Republic is legal history as Hurst and Garrison imagined it could be.
--William Novak, The University of Chicago, author of The People's Welfare: Law and Regulation in Nineteenth-Century America
TABLE OF CONTENTS
Contents
Introduction
1. Crippled Workingmen, Destitute Widows, and the Crisis of Free Labor
2. The Dilemmas of Classical Tort Law
3. The Cooperative Insurance Movement
4. From Markets to Managers
5. Widows, Actuaries, and the Logics of Social Insurance
6. The Passion of William Werner
7. The Accidental Republic
Conclusion
Notes
Acknowledgments
Index