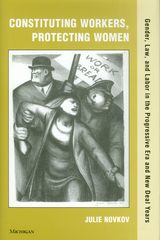 Constitutional considerations of protective laws for women were the analytical battlefield on which the legal community reworked the balance between private liberty and the state's authority to regulate. Julie Novkov focuses on the importance of gender as an analytical category for the legal system.
During the Progressive Era and New Deal, courts often invalidated generalized protective legislation, but frequently upheld measures that limited women's terms and conditions of labor. The book explores the reasoning in such cases that were decided between 1873 and 1937. By analyzing all reported opinion on the state and federal level, as well as materials from the women's movement and briefs filed in the U.S. Supreme Court, the study demonstrates that considerations of cases involving women's measures ultimately came to drive the development of doctrine.
The study combines historical institutionalism and feminism to address constitutional interpretation, showing that an analysis of conflict over the meaning of legal categories provides a deeper understanding of constitutional development. In doing so, it rejects purely political interpretations of the so-called Lochner era, in which the courts invalidated many legislative efforts to ameliorate the worst effects of capitalism. By addressing the dynamic interactions among interested laypersons, attorneys, and judges, it demonstrates that no individuals or institutions have complete control over the generation of constitutional meaning.
Julie Novkov is Assistant Professor of Political Science, University of Oregon
TABLE OF CONTENTS
Contents
List of Tables
Acknowledgments
1. Rethinking the Constitutional Crisis of the 1930s: The Forgotten Doctrinal Roots of the Modern Welfare State
2. Generalized Balancing: The Early Struggles over Protective Labor Legislation
3. Specific Balancing: Regulating Labor and Laborers
4. Laborer-Centered Analysis: The Ascendancy of Women's Legislation
5. Gendered Rebalancing: Minimum Wages and the Battle over Equality
6. Reflecting on Gender, Due Process, and Constitutional Development
Appendix on Data and Methods
Legal Briefs
Materials from the Women's Movement and Other Contemporary Sources
Secondary Sources
Federal Cases
State Cases
Cases Decided after West Coast Hotel v. Parrish
Index
REQUEST ACCESSIBLE FILE