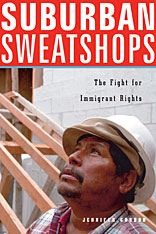 Jorge Bonilla is hospitalized with pneumonia from sleeping at the restaurant where he works, unable to afford rent on wages of thirty cents an hour. Domestic worker Yanira Juarez discovers she has labored for six months with no wages at all; her employer lied about establishing a savings account for her. We live in an era of the sweatshop reborn.

In 1992 Jennifer Gordon founded the Workplace Project to help immigrant workers in the underground suburban economy of Long Island, New York. In a story of gritty determination and surprising hope, she weaves together Latino immigrant life and legal activism to tell the unexpected tale of how the most vulnerable workers in society came together to demand fair wages, safe working conditions, and respect from employers. Immigrant workers--many undocumented--won a series of remarkable victories, including a raise of thirty percent for day laborers and a domestic workers' bill of rights. In the process, they transformed themselves into effective political participants.

Gordon neither ignores the obstacles faced by such grassroots organizations nor underestimates their very real potential for fundamental change. This revelatory work challenges widely held beliefs about the powerlessness of immigrant workers, what a union should be, and what constitutes effective lawyering. It opens up exciting new possibilities for labor organizing, community building, participatory democracy, legal strategies, and social justice.
TABLE OF CONTENTS
Contents
Introduction
1. The New Sweatshops
2. The Workplace Project Story
3. Paths to Participation
4. Rights Talk and Collective Action
5. A Legal Clinic and Organizing
6. Noncitizen Citizenship
Conclusion
Notes
Acknowledgments
Index