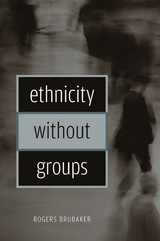 "Despite a quarter-century of constructivist theorizing in the social sciences and humanities, ethnic groups continue to be conceived as entities and cast as actors. Journalists, policymakers, and researchers routinely frame accounts of ethnic, racial, and national conflict as the struggles of internally homogeneous, externally bounded ethnic groups, races, and nations. In doing so, they unwittingly adopt the language of participants in such struggles, and contribute to the reification of ethnic groups.

In this timely and provocative volume, Rogers Brubaker—well known for his work on immigration, citizenship, and nationalism—challenges this pervasive and commonsense “groupism.” But he does not simply revert to standard constructivist tropes about the fluidity and multiplicity of identity. Once a bracing challenge to conventional wisdom, constructivism has grown complacent, even cliched. That ethnicity is constructed is commonplace; this volume provides new insights into how it is constructed. By shifting the analytical focus from identity to identifications, from groups as entities to group-making projects, from shared culture to categorization, from substance to process, Brubaker shows that ethnicity, race, and nation are not things in the world but perspectives on the world: ways of seeing, interpreting, and representing the social world."
TABLE OF CONTENTS
Cover
Title Page
Copyright
Dedication
Contents
Acknowledgments
Introduction
Chapter 1. Ethnicity without Groups
Chapter 2. Beyond “Identity”
Chapter 3. Ethnicity as Cognition
Chapter 4. Ethnic and Nationalist Violence
Chapter 5. The Return of Assimilation?
Chapter 6. “Civic” and “Ethnic” Nationalism
Chapter 7. Ethnicity, Migration, and Statehood in Post–Cold War Europe
Chapter 8. 1848 in 1998: The Politics of Commemoration in Hungary, Romania, and Slovakia
Notes
References
Index