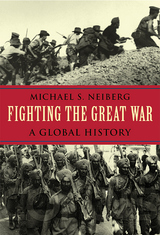 Despair at Gallipoli. Victory at Vimy Ridge. A European generation lost, an American spirit found. The First World War, the deadly herald of a new era, continues to captivate readers. In this lively book, Michael Neiberg offers a concise history based on the latest research and insights into the soldiers, commanders, battles, and legacies of the Great War.

Tracing the war from Verdun to Salonika to Baghdad to German East Africa, Neiberg illuminates the global nature of the conflict. More than four years of mindless slaughter in the trenches on the western front, World War I was the first fought in three dimensions: in the air, at sea, and through mechanized ground warfare. New weapons systems--tanks, bomber aircraft, and long-range artillery--all shaped the battle environment. Moving beyond the standard portrayal of the war's generals as "butchers and bunglers," Neiberg offers a nuanced discussion of officers constrained by the monumental scale of complex events. Diaries and letters of men serving on the front lines capture the personal stories and brutal conditions--from Alpine snows to Mesopotamian sands--under which these soldiers lived, fought, and died.

Generously illustrated, with many never-before-published photographs, this book is an impressive blend of analysis and narrative. Anyone interested in understanding the twentieth century must begin with its first global conflict, and there is no better place to start than with Fighting the Great War.

REVIEWS
An excellent, concise and balanced history of World War I. Neiberg's ability to present the complex events of the war in such a readable narrative is very impressive. Fighting the Great War is a valuable contribution to the literature on the conflict.
-- Edward M. Coffman, author of The Regulars: The American Army, 1898-1941


This superbly well organized book provides a highly readable and reliable general history of a war that continues to command our attention.
-- Holger Herwig, author of The First World War: Germany and Austria-Hungary, 1914-1918


A searching study of the war to end all wars.
-- Kirkus Reviews


Neiberg melds an analysis of the strategic issues facing belligerents during World War I with an understanding of the tactical challenges of conducting war in a modern industrial world...By including appraisals of the other fronts Neiberg also shows why the western front was the crucible of victory and defeat...This book reflects the remarkable development of the historiography of World War I that has occurred over the past decade.
-- Frederic Krome Library Journal


In recounting the events of WWI with skill and clarity, Neiberg...achieves a fine balance of narrative and analyses--no easy feat in a one-volume study. And Neiberg also goes considerably further afield than do many one-volume accounts.
-- Publishers Weekly


Michael Neiberg dissects the resulting carnage on both sides with chilling precision.
-- Tony Maniaty The Australian


An authoritative, compelling, and brief narrative of World War I in its military and political aspects. To provide a comprehensive account of the battles and leaders of World War I in a book fewer than four hundred pages is a major achievement. Michael S. Neiberg has accomplished that feat in a lucid, fast-paced treatment of the conflagration that raged across the entire world from 1914 to 1918 in Fighting the Great War: A Global History...Neiberg has a good eye for the relevant anecdote and offers fresh judgments about many of the key figures in this great conflict, such as Erich Ludendorff and Douglas Haig. He is also adept at explaining battles and their significance. There are few better introductions to the complex issues and enduring historical problems that grew out of the war than Neiberg's book. Balanced in its judgments, crisp in its prose, and powerful in its evocation of a formative moment in world civilization, Fighting the Great War is a significant scholarly contribution.
-- Lewis L. Gould Magill Book Reviews


Michael S. Neiberg's military history Fighting the Great War...shows the global reach of the war machine. Neiberg refuses to conclude that the war was futile or pointless, though he provides lots of evidence of strategic and tactical failures on both sides of the line.
-- Jay Winter Times Literary Supplement


Tackling a topic such as the First World War in a multivolume history is a major achievement; doing it justice in a single book is exceptional. Michael S. Neiberg's Fighting the Great War is just that kind of a book. On 364 pages, divided into thirteen chapters, the author narrates the momentous events and battles on all fronts--the Western in France and Belgium; the Eastern in Russia and Austria-Hungary; the Middle Eastern in Turkey, Mesopotamia, and Palestine; and the African in South Africa and German South West Africa...Neiberg's book is a clear, concise, and remarkably balanced study of the war that shaped the twentieth century...It is an excellent analysis of the political and military forces that drove the conflict to its bitter conclusion.
-- Bianka J. Adams Armed Forces & Society


In a fine general history of the First World War, Michael S. Neiberg attributes the massive bloodletting on the Western front to political leaders who insisted that the armed forces remain on the offensive, not to obtuse military officers as many others have.
-- Mark Moyar Historical Journal


The author of this book has written a lucid account of the military aspects of World War I. Based largely on secondary sources, his work takes the reader through the conflict's major campaigns and presents a number of crisp judgments on the era's leaders...[G]eneral readers will find the book a stimulating and accessible introduction to the conflict that shaped the course of the twentieth century.
-- Neil Heyman Historian