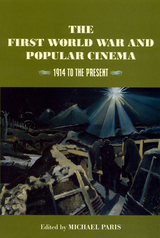 The Great War played an instrumental role in the development of cinema, so necessary was it to the mobilization efforts of the combatant nations. In turn, after the war, as memory began to fade, cinema continued to shape the war's legacy and eventually to determine the ways in which all warfare is imagined.

The First World War and Popular Cinema provides fresh insight into the role of film as an historical and cultural tool. Through a comparative approach, essays by contributors from Europe, Australia, Canada, and the United States enrich our understanding of cinematic depictions of the Great War in particular and combat in general. New historical research on both the uses of propaganda and the development of national cinemas make this collection one of the first to show the ways in which film history can contribute to our study of national histories. The contributors to the volume monitor popular perceptions of the war, the reshaping of the war's legacy, and the evolution of cinematic clichés that are perpetuated in filmmaking through the century. Some of the films they discuss are All Quiet on the Western Front, Gallipoli, The Grand Illusion, The Big Parade, Battle of the Somme, J'Accuse, Regeneration, and many more. The First World War and Popular Cinema is a vital addition to film studies and history, two fields only recently united in a productive way.

AUTHOR BIOGRAPHY
Michael Paris is a senior lecturer in the department of historical and critical studies at the University of Central Lancashire and the author of From the Wright Brothers to Top Gun: Aviation, Nationalism and Popular Cinema and Winged Warfare.
REVIEWS
"Even as WWI becomes more distant in popular memory, its representation on film has become a topic of increasing scholarly interest. . . . The present volume is a significant addition to this literature, primarily for its comparative international perspective. . . . Recommended."
— Choice

"This welcome addition to the literature embodies not merely the scholarship but also something of the verve Isenberg hoped to see devoted to the study of World War I and film. Its eleven contributors examine the impact of the war on the evolution of filmmaking in ten belligerent nations as well asùand perhaps more importantlyùthe continuing role of film in shaping the historical vision of the war. . . . There is sufficient originality and depth throughout to please the most seasoned readers. . . . The book is not only well-conceived and well-balanced as a written work, but handsome. Its elegant typeface and layout, together with the large number of appropriate photographs, make it another small victory of scholarship and aesthetics over that bane of our times—mere information."
— Film & History