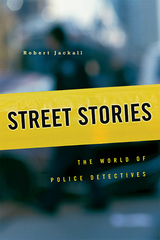 Detectives work the streets--an arena of action, vice, lust, greed, aggression, and violence--to gather shards of information about who did what to whom. They also work the cumbersome machinery of the justice system--semi-military police hierarchies with their endless jockeying for prestige, procedure-driven district attorney offices, and backlogged courts--transforming hard-won street knowledge into public narratives of responsibility for crime. Street Stories, based on years of fieldwork with the New York City Police Department and the District Attorney of New York, examines the moral ambiguities of the detectives' world as they shuttle between the streets and a bureaucratic behemoth.

In piecing together street stories to solve intriguing puzzles of agency and motive, detectives crisscross the checkerboard of urban life. Their interactions in social strata high and low foster cosmopolitan habits of mind and easy conversational skills. And they become incomparable storytellers. This book brims with the truth-is-stranger-than-fiction violence of the underworld and tells about a justice apparatus that splinters knowledge, reduces life-and-death issues to arcane hair-splitting, and makes rationality a bedfellow of absurdity.

Detectives' stories lay bare their occupational consciousness--the cunning and trickery of their investigative craft, their self-images, moral rules-in-use, and judgments about the players in their world--as well as their personal ambitions, sensibilities, resentments, hopes, and fears. When detectives do make cases, they take satisfaction in removing predators from the streets and helping to ensure public safety. But their stories also illuminate dark corners of a troubled social order.
TABLE OF CONTENTS
CONTENTS
1. In the Field
2. Looking for Shorty
3. When the Ball Fell
4. The Girl in the Park
5. Squad Work
6. Street Work
7. Waiting for Chocoláte
8. Tracing the Past
9. A Death in the Field
10. The Long Arm of the Job
Notes
Acknowledgments
Index