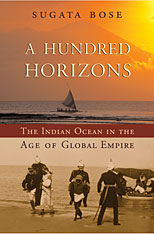 On December 26, 2004, giant tsunami waves destroyed communities around the Indian Ocean, from Indonesia to Kenya. Beyond the horrific death toll, this wall of water brought a telling reminder of the interconnectedness of the many countries on the ocean rim, and the insignificance of national boundaries. A Hundred Horizons takes us to these shores, in a brilliant reinterpretation of how culture developed and history was made at the height of the British raj.

Between 1850 and 1950, the Indian Ocean teemed with people, commodities, and ideas: pilgrims and armies, commerce and labor, the politics of Mahatma Gandhi and the poetry of Rabindranath Tagore were all linked in surprising ways. Sugata Bose finds in these intricate social and economic webs evidence of the interdependence of the peoples of the lands beyond the horizon, from the Middle East to East Africa to Southeast Asia.

In following this narrative, we discover that our usual ways of looking at history--through the lens of nationalism or globalization--are not adequate. The national ideal did not simply give way to inevitable globalization in the late twentieth century, as is often supposed; Bose reveals instead the vital importance of an intermediate historical space, where interregional geographic entities like the Indian Ocean rim foster nationalist identities and goals yet simultaneously facilitate interaction among communities.

A Hundred Horizons merges statistics and myth, history and poetry, in a remarkable reconstruction of how a region's culture, economy, politics, and imagination are woven together in time and place.
TABLE OF CONTENTS