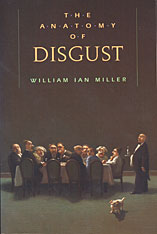 William Miller embarks on an alluring journey into the world of disgust, showing how it brings order and meaning to our lives even as it horrifies and revolts us. Our notion of the self, intimately dependent as it is on our response to the excretions and secretions of our bodies, depends on it. Cultural identities have frequent recourse to its boundary-policing powers. Love depends on overcoming it, while the pleasure of sex comes in large measure from the titillating violation of disgust prohibitions. Imagine aesthetics without disgust for tastelessness and vulgarity; imagine morality without disgust for evil, hypocrisy, stupidity, and cruelty.

Miller details our anxious relation to basic life processes: eating, excreting, fornicating, decaying, and dying. But disgust pushes beyond the flesh to vivify the larger social order with the idiom it commandeers from the sights, smells, tastes, feels, and sounds of fleshly physicality. Disgust and contempt, Miller argues, play crucial political roles in creating and maintaining social hierarchy. Democracy depends less on respect for persons than on an equal distribution of contempt. Disgust, however, signals dangerous division. The high's belief that the low actually smell bad, or are sources of pollution, seriously threatens democracy.

Miller argues that disgust is deeply grounded in our ambivalence to life: it distresses us that the fair is so fragile, so easily reduced to foulness, and that the foul may seem more than passing fair in certain slants of light. When we are disgusted, we are attempting to set bounds, to keep chaos at bay. Of course we fail. But, as Miller points out, our failure is hardly an occasion for despair, for disgust also helps to animate the world, and to make it a dangerous, magical, and exciting place.

REVIEWS
William Ian Miller...meticulously dissects the notion of disgust with the rigor of a legal brief, trying to determine its boundaries and powers.
-- Edward Rothstein New York Times


Having ably dissected humiliation in his 1993 book of that title, Miller now sets his keen insights on something even more fundamental to the human condition: disgust. It is easy to dismiss disgust as a mere gut-level twinge; after all, the word (and thus, to some extent, the concept) did not even enter the English language until the 17th century. But Miller convincingly argues for disgust's wide-ranging cultural influence...With an Aristotelian zeal and thoroughness, he proceeds to explore the ramifications of disgust's various manifestations, from its role as the strict guardian of social hierarchies to its place as the gentle handmaiden of civilization...Miller has done a tasteful and intelligent job of shedding light on the muck of our most visceral and primordial emotion.
-- Kirkus Reviews


This is unique: an investigation into disgust and how we manage to sublimate aversion into sociological, psychological, and cultural channels...Readers willing to overcome their own disgust may find [Miller's idea] a brilliant one and also an unusual way to address how we love...and how we hate...More than mapping out revulsion, however, Miller maintains that moral outlooks emanate from disgust--a radical proposition that is argued provocatively.
-- Booklist


[A] learned book...Miller rightly perceives that disgust helps to define our identities, create hierarchies, and order our world.
-- Anthony Storr The Observer


Miller is a professor of law, but he brings to his task a mind well-stocked in literature, psychology, anthropology and history. He aims to bridge the academic and lay worlds, and to restore moral psychology to the wholeness it had for Montaigne and La Rochefoucauld...He wants us to treat disgust with the seriousness it deserves, as a determinant of love, sexuality, politics, and even our sense of self. And against all the odds he's succeeded: this is a fascinating book. Disgust is more than a feeling: it is an emotion with an inescapably moral tinge, and it has to be learned (the Wolf Boy of Aveyron did not know it). It is not simple misanthropy or plain nausea, but it is Sartre's existential nausee; it is Hamlet's view of the world and everyone in it. It is a response to defilement; it denotes a recoil from horror (cruelty and gore, or even Beauty and the Beast); it arises suddenly, but is slow to dissipate. And disgust is not a disembodied emotion like contempt. It is too visceral to be ironic, it always involves the senses, and it expresses itself in physical terms...Dealing in ideas which are frowstily familiar, [Miller] makes of them something startlingly fresh. This exploration of the psyche's murky byways would make a major book in itself, but Miller's purpose is deeper: he wants to prove that disgust is actually useful--in love, and possibly in the social arena.
-- Michael Church Financial Times


Although Miller is not the first scholar to bring disgust out from the spell of silence under which it has traditionally been kept hidden, he is the first to do so with a depth and empirical amplitude that corresponds to the complexity of the topic...Miller has written a compact study of a roiling subject, studded with local brilliances, that makes a large, but clearly arguable, point. Human society needs the "moral emotions," disgust perhaps most of all, to enforce its taboos, its armory of boundary-rules, and to keep pollution at bay.
-- W. R. Robertson Canadian Review of Comparative Literature


Miller is certainly an expert on the unsavory. He brilliantly marshals sources that span a millennium of Western history, drawing critically on the works of such diverse thinkers as Hume, Hazlitt, and Freud.
-- Library Journal


Miller's book has secured one of those rare gifts: a perfectly realized cover. In a dark room, a large group of diners looks disapprovingly at the viewer. The one empty seat indicates that he or she once had a place at the table but is now excluded...Miller mines history (particularly the Middle Ages), literature (particularly skaldic), Freud, Orwell and his own experiences as a parent of four young children to show the holes in Mary Douglas's theory that the disgusting is anomalous, something that doesn't fit (say, hair growing out of ears), and in Paul Rozin's argument that disgust resides in "food rejection or in anxieties about our animal origins." There's plenty of talk about unconscious desire and surfeit of the generative...but above all, Miller argues that disgust establishes rank...Especially after the 18th century, disgust became more clearly bound up with class, bourgeois good taste and moral values. Miller's a fine, entertaining, self-deprecating writer who has created a book that, if not always appetizing, is still a tasteful examination of a strong emotion that is generally held at arm's length.
-- Publishers Weekly (starred review)


[A] marvelously fertile new book...a wonderfully unclassifiable work that mixes history and philosophy with autobiographical reflections, [and] ranges from frank (though never crude) discussions of the comic potential of flatulence to the deeper implications of disgust for a democratic society.
-- David Futrelle Salon Magazine (Web)


While much of Miller's The Anatomy is devoted to a discussion of psychological responses to the disgusting, his most important contribution may be his detailing of the social and political ramifications of those responses.
-- Michael Kenney Boston Globe


Miller has written a wide-ranging and rich account of the emotion of disgust, drawing on psychology, literature, and history--all filtered through his own vivid narrative of the phenomena of bodily existence… Many writers about disgust have treated it as a bare feeling, with little or no cognitive content. Miller argues powerfully that this approach is inadequate. Disgust actually has a very complex and sophisticated cognitive content.
-- Martha C. Nussbaum New Republic


William Miller...[is] an original and imaginative law professor...who studies what used to be called the "moral passions". He has followed his 1993 book Humiliation with a fascinating study of disgust--a universal human feeling that underpins many moral responses...His literary evidence is rich: Swift's fascination with the stinking privy stool behind the dressing table; Shakespeare's bubbling cauldron of witch-brew; the maggot-blown world of Jacobean tragedy; Freud gaping at the engulfing vagina...But Mr Miller does more than catalogue revoltingness. His interest is in the moral meaning of disgust...[T]his is a thought-provoking, humane study.
-- The Economist


While The Anatomy of Disgust does disgust, it also enthralls, enlightens, dazzles and entertains. It "anatomizes" disgust--which Miller defines as a "strong sense of aversion to something perceived as dangerous because of its powers to contaminate, infect or pollute"--by exploring it as both a physical sensation and a moral sentiment. In both cases, it turns out, disgust has enormous political and social implications. But perhaps the most striking thing about The Anatomy of Disgust, as Miller himself says, is its willingness to be "methodologically promiscuous", to draw on history, literature, moral philosophy and psychology as well as on events from Miller's own life...What this beautifully written book reminds us so brilliantly is how much the humanities--and in some ways only the humanities--can tell us about the empirical world, the world of physical sensation, social behaviour, and political conflict.
-- Andrew Stark Times Literary Supplement


[A] most useful book...one that takes its readers, however reluctantly, down alleys of life worth traversing. One wouldn't have thought that the subject of disgust could exfoliate so elaborately, or throw off so many provocative insights, as it does in these pages, not only into the way we live but into the way we have always lived. The capacity for disgust, it turns out, may be as significant as any quality we possess...[Miller] is excellent when, enlarging his argument beyond the level of the heartily repulsive, he takes up the social subtleties of disgust.
-- Joseph Epstein The New Yorker