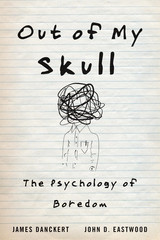 No one likes to be bored. Two leading psychologists explain what causes boredom and how to listen to what it is telling you, so you can live a more engaged life.

We avoid boredom at all costs. It makes us feel restless and agitated. Desperate for something to do, we play games on our phones, retie our shoes, or even count ceiling tiles. And if we escape it this time, eventually it will strike again. But what if we listened to boredom instead of banishing it?

Psychologists James Danckert and John Eastwood contend that boredom isn’t bad for us. It’s just that we do a bad job of heeding its guidance. When we’re bored, our minds are telling us that whatever we are doing isn’t working—we’re failing to satisfy our basic psychological need to be engaged and effective. Too many of us respond poorly. We become prone to accidents, risky activities, loneliness, and ennui, and we waste ever more time on technological distractions. But, Danckert and Eastwood argue, we can let boredom have the opposite effect, motivating the change we need. The latest research suggests that an adaptive approach to boredom will help us avoid its troubling effects and, through its reminder to become aware and involved, might lead us to live fuller lives.

Out of My Skull combines scientific findings with everyday observations to explain an experience we’d like to ignore, but from which we have a lot to learn. Boredom evolved to help us. It’s time we gave it a chance.

REVIEWS
Boredom is often inescapable these days, as social distancing guidelines keep many of us at home…[This] is an engaging and timely read that is anything but boring.
-- Erin Westgate Science


Offers an essential insight. Readers will leave with a greater understanding of what boredom is and what we can do with it. More than anything, it explains why boredom is something we shouldn’t fight so much as listen to.
-- Eric Cortellessa Washington Monthly


Danckert and Eastwood urge us to resist the temptation to ‘just kick back on the couch with a bag of chips’ and instead to find activities that impart a sense of agency and reorient us toward our goals.
-- Margaret Talbot New Yorker


Boredom bothers nearly everyone, but who likes admitting that? Take heart: James Danckert and John Eastwood demonstrate how boredom, though unpleasant, can spur us into productive action. Out of My Skull just might make you feel better about this very human failing—I know it did for me.
-- Peter Toohey, author of Boredom: A Lively History


Provocative and timely, cheeky and erudite, this book will bore no one.
-- Colin Ellard, author of Places of the Heart: The Psychogeography of Everyday Life


Few have done as much as James Danckert and John Eastwood to bring boredom out of the scientific shadows and inspire researchers to give it the consideration it deserves. Out of My Skull is a gift for the rest of us—accessible, engaging, and enlightening.
-- Mark Fenske, coauthor of The Winner's Brain: 8 Strategies Great Minds Use to Achieve Success


An inspiring look at the nature of boredom—what causes it, how we deal with it, and how it impacts our lives. Danckert and Eastwood explore some of the most pressing problems of our time, including solitary confinement, delinquency, internet addiction, and war, challenging us to consider what boredom can tell us about our world and ourselves.
-- Heather Lench, editor of The Function of Emotions: When and Why Emotions Help Us


Out of My Skull is a highly entertaining, compelling, and thought-provoking read on the subject of boredom. I learned a lot, and so will you.
-- Joshua Coleman, author of When Parents Hurt: Compassionate Strategies When You and Your Grown Child Don’t Get Along


Offers a concise and actually quite stimulating history of boredom.
-- Michael Odell The Times


[A] highly interesting and suggestive book on the analysis of boredom from a strictly psychological perspective.
-- Steven Poole The Guardian


[A] fascinating book…An extended meditation on boredom as feeling and motive, as source of misery and meaning in life, as social pathology and technological predicament…An enjoyable and enlightening read that explores the many dimensions of boredom deftly but deeply.
-- Nick Haslam Inside Story


Explore[s] what boredom really is and, crucially, whether it might serve a purpose.
-- Idler


The book could not be more timely.
-- Susie Mesure inews

TABLE OF CONTENTS
Cover
Title Page
Copyright
Dedication
Contents
Introduction
1. Boredom by Any Other Name
2. A Goldilocks World
3. The Motivation to Change
4. Across the Life Span
5. A Consequential Experience
6. Boredom at the Extremes
7. The Search for Meaning
8. An Epidemic in the Making
9. Just Go with the Flow
Conclusion
Notes
References
Acknowledgments
Illustration Credits
Index