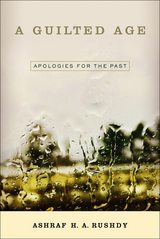 Public apologies have become increasingly common scenes and representative moments in what appears to be a global process of forgiveness. The apology-forgiveness dynamic is familiar to all of us, but what do these rituals of atonement mean when they are applied to political and historical events?

In his timely, topical, and incisive book A Guilted Age, Ashraf Rushdy argues that the proliferation of apologies by politicians, nations, and churches for past events—such as American slavery or the Holocaust—can be understood as a historical phenomenon. In our post–World War II world, Rushdy claims that we live in a “guilted age.”

A Guilted Age identifies the two major forms of apologies—political and historical—and Rushdy defines the dynamics and strategies of each, showing how the evolution of one led to the other. In doing so, he reveals what apology and forgiveness do to the past events they respectively apologize for and forgive—and what happens when they fail.

AUTHOR BIOGRAPHY
Ashraf H. A. Rushdy is the Benjamin Waite Professor of African American Studies and English, and the Academic Secretary at Wesleyan University. He is the author of The Empty Garden: The Subject of Late Milton, Neo-Slave Narratives: Studies in the Social Logic of a Literary Form, Remembering Generations: Race and Family in Contemporary African American Fiction, American Lynching, and The End of American Lynching.
TABLE OF CONTENTS