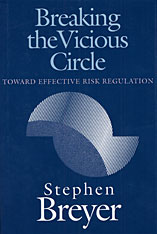 Breaking the Vicious Circle is a tour de force that should be read by everyone who is interested in improving our regulatory processes. Written by a highly respected federal judge, who would go on to serve on the Supreme Court, and who obviously recognizes the necessity of regulation but perceives its failures and weaknesses as well, it pinpoints the most serious problems and offers a creative solution that would for the first time bring rationality to bear on the vital issue of priorities in our era of limited resources.