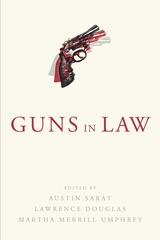 Weapons have been a source of political and legal debate for centuries. Aristotle considered the possession of arms a fundamental source of political power and wrote that tyrants "mistrust the people and deprive them of their arms." Today ownership of weapons—whether handguns or military-grade assault weapons—poses more acute legal problems than ever before. In this volume, the editors' introduction traces the history of gun control in the United States, arguing that until the 1980s courts upheld reasonable gun control measures. The contributors confront urgent questions, among them the usefulness of history as a guide in ongoing struggles over gun regulation, the changing meaning of the Second Amendment, the perspective of law enforcement on guns and gun control law, and individual and relational perspectives on gun rights.

The contributors include the editors and Carl T. Bogus, Jennifer Carlson, Saul Cornell, Darrell A.H. Miller, Laura Beth Nielsen, and Katherine Shaw.
AUTHOR BIOGRAPHY
AUSTIN SARAT is William Nelson Cromwell Professor of Jurisprudence and Political Science and associate dean of faculty at Amherst College.LAWRENCE DOUGLAS is James J. Grosfeld Professor of Law, Jurisprudence, and Social Thought at Amherst College.MARTHA MERRILL UMPHREY is Bertrand H. Snell 1894 Professor in American Government and director of the Center for Humanistic Inquiry at Amherst College
REVIEWS
<P>This edited volume makes a significant contribution to at least a couple of different scholarly literatures [including] recent originalist assumptions informing Second Amendment jurisprudence.</P> <P>This collection of new research from leading scholars in the fields of history, sociology, public policy, and law offers no easy solutions but recognizes that the future of gun regulation in America will be as fraught as its past.</P>