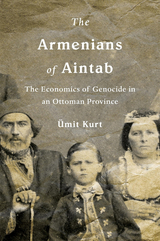 A Turk’s discovery that Armenians once thrived in his hometown leads to a groundbreaking investigation into the local dynamics of genocide.

Ümit Kurt, born and raised in Gaziantep, Turkey, was astonished to learn that his hometown once had a large and active Armenian community. The Armenian presence in Aintab, the city’s name during the Ottoman period, had not only been destroyed—it had been replaced. To every appearance, Gaziantep was a typical Turkish city.

Kurt digs into the details of the Armenian dispossession that produced the homogeneously Turkish city in which he grew up. In particular, he examines the population that gained from ethnic cleansing. Records of land confiscation and population transfer demonstrate just how much new wealth became available when the prosperous Armenians—who were active in manufacturing, agricultural production, and trade—were ejected. Although the official rationale for the removal of the Armenians was that the group posed a threat of rebellion, Kurt shows that the prospect of material gain was a key motivator of support for the Armenian genocide among the local Muslim gentry and the Turkish public. Those who benefited most—provincial elites, wealthy landowners, state officials, and merchants who accumulated Armenian capital—in turn financed the nationalist movement that brought the modern Turkish republic into being. The economic elite of Aintab was thus reconstituted along both ethnic and political lines.

The Armenians of Aintab draws on primary sources from Armenian, Ottoman, Turkish, British, and French archives, as well as memoirs, personal papers, oral accounts, and newly discovered property-liquidation records. Together they provide an invaluable account of genocide at ground level.

REVIEWS
Kurt’s superb reconstruction of how Ottoman Armenians were plundered of their homes and businesses shows that everyone was in on it: from greedy locals to opportunistic regional officials to ruthless central leaders. Sealed in stone as well as blood, their criminal bargain forms the shaky foundations of Turkish society—as such bargains do in many countries.
-- A. Dirk Moses, author of The Problems of Genocide: Permanent Security and the Language of Transgression


A unique contribution and a brilliant crystallization of insights from recent scholarship on the Armenian genocide. Kurt methodically excavates and reconstructs the case of the Armenians of Aintab as a microcosm for the empire before, during, and after the catastrophic events of 1915. The result is a clear, straightforward, and powerful narrative history as illuminating as it is disturbing. Parts of this tale take one’s breath away.
-- Christine M. Philliou, author of Turkey: A Past Against History


A major contribution to our understanding of the Armenian Genocide that will be of great interest to those studying not only the genocide itself but also the role of property expropriation in genocide generally. As Kurt convincingly shows, the Armenian Genocide and its redistribution of wealth to local Turkish and other Muslim groups helped ‘nationalize’ the economy and create new, local elites. I highly recommend this book.
-- Stefan Ihrig, author of Justifying Genocide: Germany and the Armenians from Bismarck to Hitler


In a perfect illustration of a local story yielding broad historical insights, Kurt illuminates the Armenian Question in all its dimensions. In examining the elimination of the Armenians of Aintab by local Muslim elites, he follows the birth of family fortunes built on the looting of Armenian property, and often the murder of neighbors. His book is a prime example of the work of a new generation of Ottoman Empire historians who fearlessly tackle taboo subjects and utilize sources well beyond official archives.
-- Raymond H. Kévorkian, author of The Armenian Genocide: A Complete History


This important, well-written book sheds much-needed light on the late Ottoman state and the Armenian genocide. Kurt shows that genocide is for the perpetrators a creative as much as a destructive endeavor. As well as eradicating the Armenian community, deportation was also a means of reorienting the Muslim population to a new ideological identity. Plunder was a way of creating a Turkic-Muslim bourgeoisie as a driver of national modernization in a Darwinian world of struggle.
-- Donald Bloxham, author of The Great Game of Genocide: Imperialism, Nationalism, and the Destruction of the Ottoman Armenians


A beautifully written, richly sourced exploration of the expulsion and destruction of the Armenian community of Aintab. Enduring family fortunes were built on state-sanctioned expulsions and theft of assets, a story that could, and should, be told about other post-Ottoman peoples and lands. This is an exemplary late Ottoman social history of a prosperous, but also deeply traumatized, provincial town, and probably the best book ever published about Antep.
-- Michael Provence, author of The Last Ottoman Generation and the Making of the Modern Middle East


Stunning…Offers a powerful lens into the intricacies on the local level of how genocides are carried out…[An] extraordinarily revealing and courageous book.
-- Ronald Grigor Suny Turkish Studies


An important book on the economics of genocide. The Armenians of Aintab seeks to explain the Armenian genocide as a process of economically motivated destruction…Significantly, this approach demonstrates how genocide works as a top-down and bottom-up process.
-- Michelle Tusan Canadian Journal of History


Deeply researched and a pathbreaking analysis…Impressively expand[s] the source base that scholars have thus far utilized in telling the history of the Armenian Genocide…It is difficult to overstate the importance of this impressive book. Kurt’s painstaking research reveals that those who would claim that Aintab’s Armenians simply ‘left,’ are, in fact, silencing a terrifying history of dispossession of neighbors by their neighbors.
-- Max Bergholz Journal of the Ottoman and Turkish Studies Association