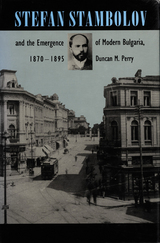 Stefan Stambolov and the Emergence of Modern Bulgaria, 1870-1895
by Duncan M. Perry
Duke University Press, 1993
Cloth: 978-0-8223-1313-7
Little known in the United States but increasingly important in the affairs of southeastern Europe, Bulgaria is a land with a stormy history. No less stormy is the story of Stefan Stambolov, who ruled the country during some of its most turbulent years. Duncan M. Perry's biography of Stambolov, the first in English in the twentieth century, illuminates the life, motives, and personality of this major figure.
Perry begins with Bulgaria in the tumultuous years immediately following its founding in 1878. After the ousting of the country's first prince, Stambolov enters the stage as the fiery young lawyer who restored him to the throne. Although the prince promptly abdicated, Stambolov stepped into the breach and led the nation during the interregnum. Perry traces this patriotic politician's transformation into an authoritarian prime minister. He shows how Stambolov stabilized the Bulgarian economy and brought relative security to the land—but not without cost to himself and his regime. Perry depicts a man whose promotion of Bulgaria's independence exacted its price in individual rights, a ruler whose assassination in 1895 was the cause of both rejoicing and sorrow.
Stambolov thus emerges from these pages as a complex historical figure, an authoritarian ruler who protected his country's liberty at the cost of the people's freedom and whose dictatorial policies set Bulgaria upon a course of stability and modernization. An afterword compares the Bulgarian liberation era of Stambolov with the communist-era dictator, Todor Zhikov, analyzing similarities and differences.
REVIEWS
"This book assembles a wealth of new or little-known material from recent research in Bulgaria and provides us with a full-color portrait, in prudent historical perspective, of the first of the three or four Bulgarian leaders over the past century who are of significance outside the country for what they did inside this small Balkan state."—John Lampe, University of Maryland