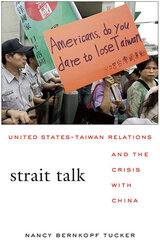 Relations among the United States, Taiwan, and China challenge policymakers, international relations specialists, and a concerned public to examine their assumptions about security, sovereignty, and peace. Only a Taiwan Straits conflict could plunge Americans into war with a nuclear-armed great power. In a timely and deeply informed book, Nancy Bernkopf Tucker traces the thorny relationship between the United States and Taiwan as both watch China’s power grow.

Although Taiwan–U.S. security has been intertwined since the 1950s, neither Taipei nor Washington ever fully embraced the other. Differences in priorities and perspectives repeatedly raised questions about the wisdom of the alignment. Tucker discusses the nature of U.S. commitments to Taiwan; the intricacies of policy decisions; the intentions of critical actors; the impact of Taiwan’s democratization; the role of lobbying; and the accelerating difficulty of balancing Taiwan against China. In particular, she examines the destructive mistrust that undermines U.S. cooperation with Taiwan, stymieing efforts to resolve cross-Strait tensions.