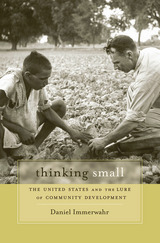 Thinking Small tells the story of how the United States sought to rescue the world from poverty through small-scale, community-based approaches. And it also sounds a warning: such strategies, now again in vogue, have been tried before, with often disastrous consequences.

“Unfortunately, far from eliminating deprivation and attacking the social status quo, bottom-up community development projects often reinforced them…This is a history with real stakes. If that prior campaign’s record is as checkered as Thinking Small argues, then its intellectual descendants must do some serious rethinking… How might those in twenty-first-century development and anti-poverty work forge a better path? They can start by reading Thinking Small.”
—Merlin Chowkwanyun, Boston Review

“As the historian Daniel Immerwahr demonstrates brilliantly in Thinking Small, the history of development has seen constant experimentation with community-based and participatory approaches to economic and social improvement…Immerwahr’s account of these failures should give pause to those who insist that going small is always better than going big.”
—Jamie Martin, The Nation
TABLE OF CONTENTS
Contents
Preface: Modernization, Development, and Community
Introduction: Actually Existing Localism
Chapter 1. When Small Was Big
Chapter 2. Development without Modernization
Chapter 3. Peasantville
Chapter 4. Grassroots Empire
Chapter 5. Urban Villages
Epilogue: What Is Dead and What Is Undead in Community Development?
Notes
Acknowledgments
Index