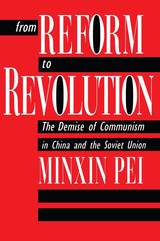 The demise of communism in the former Soviet Union and the massive political and economic changes in China are the stunning transformations of our century. Two central questions are emerging: Why did different communist systems experience different patterns of transition? Why did partial reforms in the Soviet Union and China turn into revolutions?
TABLE OF CONTENTS