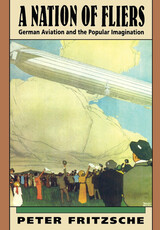 Reviews of this book:
"Peter Fritzsche's unusual and enthralling history is about the most pervasive of [Germany's] dreams, the national dream of an empire of the air."
--Martin Pawley, The Guardian

"An excellent book, beautifully written...There is really nothing quite like it in the field...Its combination of solid scholarship, appealing writing, and provocative thought makes it an important contribution to our understanding of modern German military history."

"A fascinating tale that provides a refreshing perspective on the history of early twentieth-century Germany, and Peter Fritzsche has told it with flair, passion, and an array of evidence taken from a wide range of little-known sources."

"A fundamental breakthrough in the development of an understanding of how technology fed a Faustian vision of modernism in which nationalism and industrial society became ever more compatible and ever more popular...A model in its insight into the correlation of technology and the popular imagination in the twentieth century."

"Peter Fritzsche presents a remarkable blend of technological, social, and cultural history in his study of the popular German reaction to early aviation...His findings have sizable implications for all scholars of twentieth-century Germany."