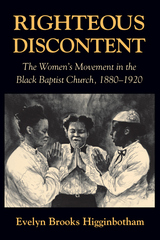 What Du Bois noted has gone largely unstudied until now. In this book, Evelyn Brooks Higginbotham gives us our first full account of the crucial role of black women in making the church a powerful institution for social and political change in the black community. Between 1880 and 1920, the black church served as the most effective vehicle by which men and women alike, pushed down by racism and poverty, regrouped and rallied against emotional and physical defeat. Focusing on the National Baptist Convention, the largest religious movement among black Americans, Higginbotham shows us how women were largely responsible for making the church a force for self-help in the black community. In her account, we see how the efforts of women enabled the church to build schools, provide food and clothing to the poor, and offer a host of social welfare services. And we observe the challenges of black women to patriarchal theology. Class, race, and gender dynamics continually interact in Higginbotham’s nuanced history. She depicts the cooperation, tension, and negotiation that characterized the relationship between men and women church leaders as well as the interaction of southern black and northern white women’s groups.

Higginbotham’s history is at once tough-minded and engaging. It portrays the lives of individuals within this movement as lucidly as it delineates feminist thinking and racial politics. She addresses the role of black Baptist women in contesting racism and sexism through a “politics of respectability” and in demanding civil rights, voting rights, equal employment, and educational opportunities.

Righteous Discontent finally assigns women their rightful place in the story of political and social activism in the black church. It is central to an understanding of African American social and cultural life and a critical chapter in the history of religion in America.