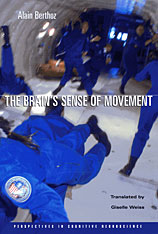 In this erudite and witty book, neuroscientist Alain Berthoz describes how human beings on earth perceive and control bodily movement. In his view, the brain acts like a simulator that is constantly inventing models to project onto the changing world, models that are corrected by steady, minute feedback from the world. This interpretation allows Berthoz to focus on psychological phenomena largely ignored in standard texts: proprioception and kinaesthesis, the mechanisms that maintain balance and coordinate actions, and basic perceptual and memory processes involved in navigation.
TABLE OF CONTENTS