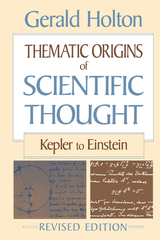 The highly acclaimed first edition of this major work convincingly established Gerald Holton’s analysis of the ways scientific ideas evolve. His concept of “themata,” induced from case studies with special attention to the work of Einstein, has become one of the chief tools for understanding scientific progress. It is now one of the main approaches in the study of the initiation and acceptance of individual scientific insights.

Three principal consequences of this perspective extend beyond the study of the history of science itself. It provides philosophers of science with the kind of raw material on which some of the best work in their field is based. It helps intellectual historians to redefine the place of modern science in contemporary culture by identifying influences on the scientific imagination. And it prompts educators to reexamine the conventional concepts of education in science.

In this new edition, Holton has masterfully reshaped the contents and widened the coverage. Significant new material has been added, including a penetrating account of the advent of quantum physics in the United States, and a broad consideration of the integrity of science, as exemplified in the work of Niels Bohr. In addition, a revised introduction and a new postscript provide an updated perspective on the role of themata. The result of this thoroughgoing revision is an indispensable volume for scholars and students of scientific thought and intellectual history.
TABLE OF CONTENTS