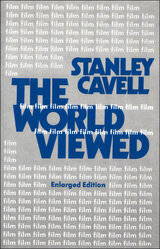 Stanley Cavell looks closely at America’s most popular art and our perceptions of it. His explorations of Hollywood’s stars, directors, and most famous films—as well as his fresh look at Godard, Bergman, and other great European directors—will be of lasting interest to movie-viewers and intelligent people everywhere.