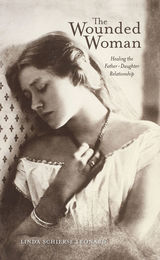 This book is an invaluable key to self-understanding. Using examples from her own life and the lives of her clients, as well as from dreams, fairy tales, myths, films, and literature, Linda Schierse Leonard, a Jungian analyst, exposes the wound of the spirit that both men and women of our culture bear—a wound that is grounded in a poor relationship between masculine and feminine principles.

Leonard speculates that when a father is wounded in his own psychological development, he is not able to give his daughter the care and guidance she needs. Inheriting this wound, she may find that her ability to express herself professionally, intellectually, sexually, and socially is impaired. On a broader scale, Leonard discusses how women compensate for cultural devaluation, resorting to passive submission (“the Eternal Girl”), or a defensive imitation of the masculine (“the Armored Amazon”).

The Wounded Woman shows that by understanding the father-daughter wound and working to transform it psychologically, it is possible to achieve a fruitful, caring relationship between men and women, between fathers and daughters, a relationship that honors both the mutuality and the uniqueness of the sexes.

In addition to The Wounded Woman,Linda Leonard is the author of several other best-selling books, including Witness to the Fire and Meeting the Madwoman. She has been in private practice as a Jungian analyst for over forty years and is a founding member of the Inter-Regional Society of Jungian Analysts. She currently resides in Boulder, Colorado.