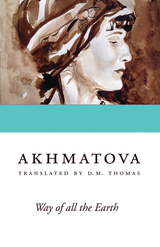 Anna Akhmatova is considered one of Russia’s greatest poets. Her life encompassed the turmoil of the Russian Revolution and the paranoia and persecution of the Stalinist era: her works embody the complexities of the age. At the same time, she was able to merge these complexities into a single, poetic voice to speak to the Russian people with whom she so closely and proudly identified.

Way of All the Earth contains short poems written between 1909 and 1964, selected from Evening, Rosary, White Flock, Plantain, Anno Domini, Reed, and The Seventh Book. Intricately observed and unwavering in their emotional immediacy, these strikingly modern poems represent one of the twentieth century’s most powerful voices.