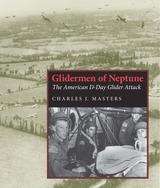 Although the word gliderman does not appear in the dictionary, a brave group of World War II soldiers known as glidermen flew into combat inside unarmed and unarmored canvas-covered gliders known as "flying coffins."

Charles J. Masters points out that because World War II was the first truly mechanized and armored global conflict, the role of the glidermen and their combat gliders was at best anachronistic. Fighter planes exceeded speeds of 400 miles per hour and were heavily armed with multiple machine guns. Dogfights had taken on new dimensions, eclipsing the tactics, speed, and firepower first evidenced by the fragile biplanes of World War I. Tanks achieved a lethal efficiency barely dreamed of even five years before the war. An array of weaponry never seen in any previous military engagement confronted the combat soldier during World War II.And yet there were gliders. And glidermen.

Masters tells of these men and of their fragile aircraft in a war of mechanized chaos. In copious detail, he describes the gliders and the Americans who boarded them during the American D-Day glider attack, a mission that was part of the overall cross-channel plan code-named "Operation Neptune." The son of a gliderman with the 82nd Airborne Division, Masters had unique access to the surviving glidermen and comrades of his father. During the course of his research, he located and interviewed 106 of the men who had flown the D-Day mission in gliders. As an insider—in a sense almost a member of the family and fraternity of glider-men—Masters was cordially received by the members of the American airborne divisions that participated in D-Day, many of whom told him stories they had seldom told their own friends and families. Often harrowing and always riveting, the stories these men told an eager listener and researcher are very much a part of this narrative.

Masters has also assembled the finest existing collection of photographs of the American D-Day glider attack. These photographs—many of which have never before been published—provide a spectacular photographic record of a little-known aspect of this war. In fact, because of the short military history of the American combat glider, most readers, including veterans of World War II, will not have seen one of these "flying coffins," even at a distance. These photographs afford the opportunity to actually examine the inside of the combat gliders used on D-Day, to observe the glidermen in action, and to witness the often tragic consequences of the glider attack.

Charles J. Masters is a writer, an attorney, and a historian.

"The copious illustrations with quality reproductions . . give this concise historical monograph a dramatic visual dimension."—Donald S. Detwiler, author of A Short History of Germany

"The copious illustrations with quality reproductions . . give this concise historical monograph a dramatic visual dimension."—Donald S. Detwiler, author of A Short History of Germany

A selection of the Military Book Club and the Aviator’s Guild Book Club “Charles Masters is superb in his portrayal of the glidermen who flew in the ‘flying coffins’ of D-Day. Absolutely intriguing.”—Daniel K. Inouye, U.S. senator and recipient of the Distinguished Service Cross, World War II, Europe

TABLE OF CONTENTS
Cover
Title
Copyright
Dedication
Quote
Contents
Plates
Preface
Map 1
Map 2
1.
A Secret Weapon Enters the War
2.
The American Combat-Glider Program Takes Off
3.
Building Up in Britain for an Airborne Assault
4.
Waiting for Judgment Day
5.
Decision: Normandy
6.
The Enemy Prepares a Reception
7.
From Chicago to Hackensack: The Final Plan
8.
The Glider Assault on Normandy
9.
After-Action Considerations
Bibliography
Index
About the Author
Back Cover