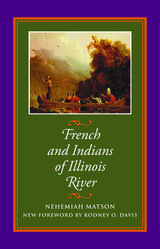 Complex and paradoxical, Nehemiah Matson (1816–1873) celebrated the occupation of the Middle West by European pioneers even as he labored to preserve the memory of the natives these pioneers replaced. He perpetuated the memory of the Indians who were driven out of the territory, but he nevertheless accumulated wealth selling their land to the pioneers. Rodney O. Davis notes in his new foreword to this book that Matson combined the attributes of a scholar with those of a salesman and promoter.

Matson settled in Princeton, Illinois, in 1836. He left behind a library partially endowed by him, named for him, and finally completed in 1913. According to Davis, however, Matson’s other legacy, “of equal significance in his own eyes, consisted of the five books he authored on northern Illinois and Illinois River history and cartography, volumes based not only on conscientious scholarship but also on both Indian and white reminiscence and on local folklore.”

Matson’s historical writings are valuable even when he deals with well-known events because his personal perspective makes his observations unique. Without the stories and reminiscences he collected, much valuable information would have been lost, especially since many of his informants, both Indian and European, were illiterate. Because his informants often told conflicting stories, Matson admitted that “harmonizing all conflicting accounts . . . has not been a success.”

Although Matson’s sources may not always have agreed, and sometimes his heart may have overruled his head and colored his accounts, he was a conscientious and committed author. “Obviously,” Davis explains, “this book must be evaluated as what it is, a piece of colorful local history, romantically anchored in legend yet rooted also in invaluable research and produced by a dedicated amateur whose standards were high. . . . French and Indians of Illinois River is a model of its type, indeed a minor classic.”

Rodney O. Davis is the director of the Lincoln Studies Center at Knox College in Galesburg, Illinois.