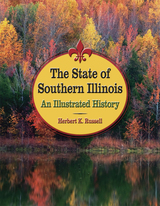 In The State of Southern Illinois: An Illustrated History, Herbert K. Russell offers fresh interpretations of a number of important aspects of Southern Illinois history. Focusing on the area known as “Egypt,” the region  south of U.S. Route 50 from Salem south to Cairo, he begins his book with the earliest geologic formations and  follows Southern Illinois’s history into the twenty-first century. The volume is richly illustrated with maps and photographs, mostly in color, that highlight the informative and straightforward text.

Perhaps most notable is the author’s use of dozens of heretofore neglected sources to dispel the myth that Southern Illinois is merely an extension of Dixie. He corrects the popular impressions that slavery was introduced by early settlers from the South and that a majority of Southern Illinoisans wished to secede. Furthermore, he presents the first in-depth discussion of twelve pre–Civil War, free black communities located in the region. He also identifies the roles coal mining, labor violence, gangsters, and the media played in  establishing the area’s image. He concludes optimistically, unveiling a twenty-first-century Southern Illinois filled with myriad attractions and opportunities for citizens and tourists alike.

The State of Southern Illinois is the most accurate all-encompassing volume of history on this unique area that often regards itself as a state within a state. It offers an entirely new perspective on race relations, provides insightful information on the cultural divide between north and south in Illinois, and pays tribute to an often neglected and misunderstood region of this multidimensional state, all against a stunning visual backdrop.

AUTHOR BIOGRAPHY
Herbert K. Russell, formerly the Executive Director for College Relations at John A. Logan College, is a literary scholar and southern Illinois historian who has been a college teacher, an editor and a writer. He is the author of Edgar Lee Masters: A Biography (University of Illinois Press) and editor of A Southern Illinois Album,Southern Illinois Coal: A Portfolio, and The Enduring River: Edgar Lee Masters' Uncollected Spoon River Poems (all published by SIU Press).
TABLE OF CONTENTS
Jacket Flaps
Book Title
Copyright
Acknowledgments
Introduction
Text
Sources
Bibliography
Index
Author Bio
Also available in the Shawnee Book series
Back Cover