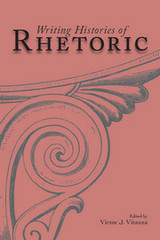 This collection of essays, edited by Victor J. Vitanza, is a historiography of rhetoric, summarizing what has recently been accomplished in the revision of traditional histories of rhetoric and discussing what might be accomplished in the future. Featuring a variety of approaches—classical, revisionary, and avant-garde—it includes articles by Janet M. Atwill, James A. Berlin, William A. Covino, Sharon Crowley, Hans Kellner, John Poulakos, Takis Poulakos, John Schilb, Jane Sutton, Kathleen Ethel Welch, Lynn Worsham, and Victor J. Vitanza.

In the first essay, Sharon Crowley identifies the major players and primary issues in a chronological narrative of the debate about the writing of the history of rhetoric that has arisen between traditionalists / essentialists and revisionists/constructionists. In recent years, traditionalists have demanded a more complete and accurate history, while revisionists have sought a critical understanding of the various epistemological-ideological grounds upon which a history of rhetoric had been and could be constructed. Revisionists, in their search for multiple, contestatory histories, have begun to critique one another, breaking into two general groups: one favoring a political-social program, the other resisting and disrupting such an approach.

Vitanza echoes Crowley’s review of this ongoing debate by asking a crucial question: What exactly does it mean to be a revisionist historian? By combining the disintegration of various revisionist and subversive positions into a communal "we," he asks an additional question: Who is the "we" writing histories of rhetoric?

The essays that follow give a rich answer to Vitanza’s questions. They bring the writing of histories of rhetoric into the larger area of postmodern theory, raising neglected issues of race, gender, and class. Written with a variety of intentions, some of the essays are expository and highly argumentative while others are manifestos, innovative and far-reaching in tone. Still others are summaries and background studies, providing useful information to both the novice student and the experienced scholar.

This book, situated at a juncture between two disciplines, composition studies and speech, will be a landmark collection for many years.

AUTHOR BIOGRAPHY
Victor J. Vitanza is an associate professor of English at the University of Texas, Arlington. He is the editor of PRE/TEXT: The First Decade and (with Michelle Ballif) Realms of Rhetoric.

REVIEWS
“[Vitanza] has assembled a first-rate collection of essays on an important topic, and for this work he deserves our gratitude.”—Technical Writing Communication
— -