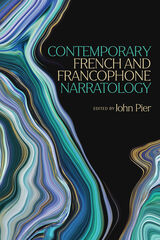 The essays included in this collection seek to take the pulse of recent developments in narratological research in the French-speaking countries. Theorists in these countries heavily participated in and shaped narratology, an outgrowth of the structuralist movement during the 1960s and 1970s. While US, German, and Scandinavian theorists took the forefront in the 1990s, narratology in France faded into the background. It was not until the turn of the century that a new interest in narratological issues among French researchers emerged. Activity in the field has since intensified, spurred on, in part, by the realization that narratology cannot be summed up by its formalist and structuralist origins.
AUTHOR BIOGRAPHY
John Pier is Professor Emeritus of English at the University of Tours and a statutory member of the Centre de recherches sur les arts et le langage (CNRS/EHESS) in Paris.
REVIEWS
“Contemporary French and Francophone Narratology not only provides a broad and diverse range of work but it also illuminates various narrative aspects and narratological areas.” —Gerald J. Prince, author of Narrative as Theme: Studies in French Fiction