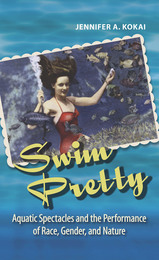 Drawing on cultural associations with bodies of water, the spectacle of pretty women, and the appeal of the concept of “family-friendly” productions, performative aquatic spectacles portray water as an exotic fantasy environment exploitable for the purpose of entertainment. In Swim Pretty, Jennifer A. Kokai reveals the influential role of aquatic spectacles in shaping cultural perceptions of aquatic ecosystems in the United States over the past century.

Examining dramatic works in water and performances at four water parks, Kokai shows that the evolution of these works and performances helps us better understand our ever-changing relationship with the oceans and their inhabitants. Kokai sorts the regard for and harnessing of water in aquatic spectacles into three categories—natural, tamed, and domesticated—and discusses the ways in which these modes of water are engaged in the performances throug an aesthetics of descension. Ultimately, this study links the uncritical love of aquatic spectacles to a disregard for the rights of marine animals and lack of concern for the marine environment.
AUTHOR BIOGRAPHY
Jennifer A. Kokai is an associate professor and the theatre program coordinator at Weber State University. She has published articles in the Journal of Dramatic Theory and Criticism, Theatre History Studies, the Journal of American Drama and Theatre, and other journals and anthologies.
TABLE OF CONTENTS


List of Illustrations
Acknowledgments
Introduction: A Drop of Water
1. The 1939 New York World’s Fair: Mermaids Obscene and Glamorous
2. Weeki Wachee Girls and Buccaneer Boys: The Evolution of Gender in Aquatic Spectacles
3. Swine Dives: The Impact of Novelty and Commerce on Aquatic Spectacles
4. The Deaths of Mermaids and Whales: The Extremity of the Aesthetics of Descension
Conclusion: Singing Mollusks and Dancing Belugas
Notes
Bibliography
Index