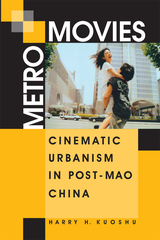 Metro Movies: Cinematic Urbanism in Post-Mao China takes readers on a comprehensive tour of the urbanization of Chinese cinema. Focusing primarily on movies from the end of the twentieth century, it is the first single-authored work to explore the relationship between the changes in Chinese society—caused in part by the advent of postsocialism, the growth of cities, and globalization—and the transformation of Chinese cinema. Author Harry H. Kuoshu examines such themes as displacement, cinematic representation, youth subculture, the private emotional lives of emerging urbanites, raw urban realism, and the allegorical contrast of the city and the countryside to illustrate the artistic richness and cultural diversity of this cinematic genre.

Kuoshu discusses the work of director Huang Jianxin, whose films follow and critique China’s changing urban political culture. He dedicates a chapter to filmmakers who followed Huang and attempted to redefine the concept of art films to regain the local audience. These directors address Chinese moviegoers’ disappointment with the international adoption of Chinese art films, their lack of interest in conventional Chinese films, and their fascination with emerging audio-video media. A considerable amount of attention is given to films of the 1990s, which focus on the social changes surfacing in China, from the trend of hooliganism and the Beijing rock scene to the arrival of an urban pop culture lifestyle driven by expansionist commerce and materialism. Kuoshu also explores recent films that confront the seedier aspects of city life, as well as films that demonstrate how urbanization has touched every fiber of Chinese living.

Metro Movies illustrates how cinematic urbanism is no longer a genre indicator but is instead an era indicator, revealing the dominance of metropolitan living on modern Chinese culture. It gives new insight into contemporary Chinese politics and culture and provides readers with a better understanding of China’s urban cinema. This book will be an excellent addition to college film courses and will fascinate any reader with an interest in film studies or Chinese culture.

Harry H. Kuoshu is an associate professor of modern languages and literatures and Asian studies at Furman University. He is the author of Celluloid China: Cinematic Encounters with Culture and Society and Lightness of Being in China: Adaptation and Discursive Figuration in Cinema and Theater.