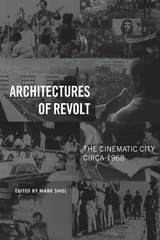 Coinciding with the fiftieth anniversary of the worldwide mass protest movements of 1968—against war, imperialism, racism, poverty, misogyny, and homophobia—the exciting anthology Architectures of Revolt explores the degree to which the real events of political revolt in the urban landscape in 1968 drove change in the attitudes and practices of filmmakers and architects alike.

In and around 1968, as activists and filmmakers took to the streets, commandeering public space, buildings, and media attention, they sought to re-make the urban landscape as an expression of utopian longing or as a dystopian critique of the established order. In Architectures of Revolt, the editor and contributors chronicle city-specific case studies from Paris, Berlin, Milan, and Chicago to New York, Los Angeles, Mexico City, and Tokyo. The films discussed range from avant-garde and agitprop shorts to mainstream narrative feature films. All of them share a focus on the city and, often, particular streets and buildings as places of political contestation and sometimes violence, which the medium of cinema was uniquely equipped to capture.

Mark Shiel is Reader in Film Studies and Urbanism in the Department of Film Studies at King’s College London. He is the author of Hollywood Cinema and the Real Los Angeles, and Italian Neorealism: Rebuilding the Cinematic City, and the co-editor of Screening the City and Cinema and the City: Film and Urban Societies in a Global Context.