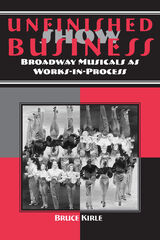 In this fresh approach to musical theatre history, Bruce Kirle challenges the commonly understood trajectory of the genre. Drawing on the notion that the world of the author stays fixed while the world of the audience is ever-changing, Kirle suggests that musicals are open, fluid products of the particular cultural moment in which they are performed. Incomplete as printed texts and scores, musicals take on unpredictable lives of their own in the complex transformation from page to stage.

Using lenses borrowed from performance studies, cultural studies, queer studies, and ethnoracial studies, Unfinished Show Business: Broadway Musicals as Works-in-Process argues that musicals are as interesting for the provocative issues they raise about shifting attitudes toward American identity as for their show-stopping song-and-dance numbers and conveniently happy endings. Kirle illustrates how performers such as Ed Wynn, Fanny Brice, and the Marx Brothers used their charismatic personalities and quirkiness to provide insights into the struggle of marginalized ethnoracial groups to assimilate. Using examples from favorites including Oklahoma!, Fiddler on the Roof, A Chorus Line, and Les Misérables, Kirle demonstrates Broadway’s ability to bridge seemingly insoluble tensions in society, from economic and political anxiety surrounding World War II to generational conflict and youth counterculture to corporate America and the “me” generation. Enlivened by a gallery of some of Broadway’s most memorable moments—and some amusing, obscure ones as well—this study will appeal to students, scholars, and lifelong musical theatre enthusiasts.

Bruce Kirle is a lecturer in music theatre at the Central School of Speech and Drama in London and a former associate professor of theatre at Roosevelt University in Chicago. He has published on the reflexive relationship between Broadway musicals and the shifting perceptions of American identity in Theatre Journal, and he received the Monette-Horwitz Dissertation Prize for 2001 - 2002 from CLAG (Center for Lesbian and Gay Studies). Before earning his doctorate, Kirle was a professional musical director. He began his career composing musicals at La MaMa in New York.