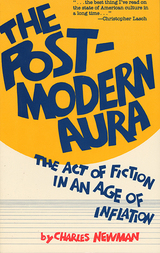 "Inflation affects literary occupations and preoccupations quite as much as it does financial scrip." Starting from this premise, Charles Newman ventures forth on an irreverent, wide-ranging discussion of the "Post-Modern" attitude in fiction, culture, and sensibility. Newman questions the "revolutionary" claims of avant-garde novelists and literary theorists, but he is no less critical of the arguments of neoconservatives, neorealists, and advocates of "moral fiction." Newman argues that neither of these groups has confronted the unprecedented break with tradition entailed by an economics and culture of inflation. A combination of cultural critique, literary criticism, economic forecast, and historical jeremiad, The Post-Modern Aura is finally a positive statement, celebrating "The Act of Fiction" and suggesting how the forces which have been devaluing it might be overcome.
AUTHOR BIOGRAPHY
Charles Newman was educated at Yale and Oxford Universities. From 1964-75 he taught at Northwestern University where he founded and edited Tri-Quarterly. Subsequently he taught at Johns Hopkins University and Washington University in St. Louis. He has been the recipient of Fulbright, Guggenheim, Rockefeller and National Endowment grants, as well as the Zabel award for A Child's History of America. His novels include New Axis, The Promisekeeper, There Must be More to Love than Death, and White Jazz.