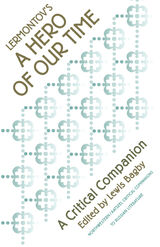 Praised as the first Russian novel of psychological realism and as a critique of the repressive era in which Mikhail Lermontov lived, A Hero of Our Time brought to life the political and social ideas that at that time could only be expressed indirectly. This latest volume in the acclaimed Northwestern/AATSEEL Critical Companions to Russian Literature series presents diverse perspectives of leading Slavic literary theorists and specialists, ethnologists, formalist critics, and Western humanists. Lending additional breadth and depth are conservative and radical reviews of the novel written at the time of its publication, plus two new essays, one on ethnic identity and the other on women's issues in the novel.
AUTHOR BIOGRAPHY
LEWIS BAGBY is a professor of Russian and the director of International Programs at the University of Wyoming. He is the author of Alexander Bestuzhev-Marlinsky and Russian Byronism.
TABLE OF CONTENTS

Mikhail Yur'evich Lermontov and A Hero of Our Time
Lewis Bagby

A Hero of Our Time
Vissarion Belinsky

A Hero of Our Time
B. M. Eikhenbaum

Compassion and the Hero: Women in A Hero of Our Time
Jane Costlow

The Caucasus and Caucasian Peoples in Lermontov's Novel
Sergei Durylin