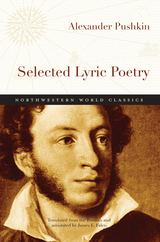 It is most fitting that Northwestern University Press, long a leading publisher of Russian literature in translation, launches the Northwestern World Classics series with a new translation of Russia's greatest poet. Included are many famous poems well known to, and often memorized by, every educated Russian, as well as lighter, more occasional pieces.

Renowned translator James Falen’s collection of 167 of Pushkin’s lyrics is arranged chronologically, beginning with verse written in the poet’s teenage years—Pushkin published his first poem at fifteen and was widely revered by his later teens—and closing with lines composed shortly before his death. As a whole, these selections reveal Pushkin's development as a poet, but they also capture the wide range of subjects and styles in Pushkin’s poetry.

Born in Moscow in 1799, Alexander Pushkin was already a literary star by the time he graduated from the Imperial Lyceum in Tsarskoe Selo. Pushkin gradually turned to social reform and advocated literary radicalism, and he was eventually exiled to southern Russia. During this time, he wrote Boris Godunov, but it was not published until years later. His novel in verse, Eugene Onegin, was published serially from 1825 to 1832. He died in 1837 from wounds sustained in a duel.

James E. Falen is a professor of Russian at the University of Tennessee. He is the translator of acclaimed editions of Pushkin’s Boris Godunov and Other Dramatic Works and Eugene Onegin; his version of the latter iswidely considered to be the one most faithful to Pushkin’s spirit.